This feature is not applicable when connecting through the service to Skype meetings as Cloud Video Interop (CVI) does not support lobby bypass with Skype for Business.

The available configuration in the service allows for either allow-list or block-list behavior to be defined by using specific IP addresses and/or subnets to control which devices are defined as trusted or as untrusted. How a calling device is defined by the service will impact whether Microsoft Teams places that participant in a meeting’s lobby or not. In most cases a trusted device will bypass the attendee lobby while an untrusted device will be placed into the lobby, but the behavior depends on the configuration of the specific Microsoft Teams meeting that is being joined.

Note: Currently a trusted device will incorrectly bypass the lobby in a Teams meeting which is set to only allow the meeting organizer to bypass the lobby. This anomaly in CVI will be fixed by Microsoft.

One exception to this behavior is when a Microsoft Teams meeting is configured to allow "Everyone" to bypass the lobby. For these meetings, any VTC joining via the RealConnect Service will directly join the meeting as both trusted and untrusted participants are automatically admitted through the lobby by Microsoft Teams. Untrusted devices cannot start a Teams meeting by default, so any untrusted VTCs joining one of these meetings before the first trusted participant joins will temporarily be staged in the lobby. Once a trusted participant joins the meeting then all attendees in the lobby will automatically be admitted into the meeting.

The ability to enable a tenant-wide lobby bypass feature has been available since the RealConnect Service for Microsoft Teams was launched and this parameter may have already been customized during or after the initial configuration of the service for a given Microsoft Office 365 tenant.

Either way, for the RealConnect Service to be allowed to define any devices as trusted then the Lobby Bypass feature for CVI must first be enabled on the Microsoft 365 tenant. This is performed via PowerShell by setting the AllowAppGuestJoinsAsAuthenticated parameter to '$true' as outlined here.
Note: Changes to this parameter can take several hours to apply to the Microsoft tenant. Enabling this setting simply means that Teams will now allow the RealConnect Service to define a connection as trusted instead of treating all connections as untrusted.

If this parameter remains set to the default value of '$false' then all VTCs will still automatically bypass the lobby for meetings set to automatically admit Everyone from the lobby. Also be aware that none of the additional Trusted Device configuration options covered on this page will function.

Once Lobby Bypass has been enabled on the tenant then individual devices or entire networks can be defined as trusted (or untrusted) by using the Trusted Device Configuration link provided on the Poly RealConnect administration portal. To access this portal a user account assigned the Global Admin role in the Microsoft 365 tenant is required. This configuration page provides two layers of control:

Changes to either of these settings are immediate and will be applied to any new calls into the service.

The first option is the setting Trust incoming calls from unknown devices and is applied to any device which does not match any specific rule defined in the policy list. This setting is already enabled by default for all new and existing RealConnect customers.

Once the prerequisite Lobby Bypass feature is enabled via PowerShell then because the above service setting is enabled by default then all calls into the RealConnect Service from any VTC to meetings scheduled by users in this tenant will be treated as trusted devices. Disabling this setting will tell the service to treat all devices as untrusted, returning the tenant to original behavior of calls going into the lobby in most scenarios. This setting's behavior is not applicable to any known devices which are later defined via the configuration in the following section.

The second option allows for the creation of multiple policies which can be used to define calls coming from specific source IP addresses or subnet ranges. Devices matching any enabled rules defined here will be identified as known and in turn will be individually treated as either trusted or untrusted, depending on the configuration in specific policy entry.

When no policies exist then all calls into the RealConnect Service are treated as coming from unknown devices and will be handled based on the configuration of Lobby Bypass and Unknown devices settings outlined above.

Adding a device policy allows any devices which match the provided IP address or range to be treated as trusted or untrusted, depending on that policy's configuration.

Currently there are four configuration settings provided in the device policy: 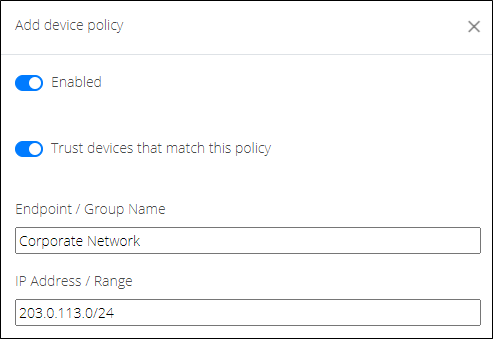 The IP Address / Range field can include any of the following supported notations:

Whether using SIP and/or H.323 protocols to place calls into the service both internal local and external public IP addresses can be used to identify devices, depending on the registration status of the calling endpoints. The public IP address typically is applied to the endpoint's call by the last Network Address Traversal (NAT) device it passed through before reaching the public Internet. This could be a standards-based video traversal system (like a Polycom RPAD or Cisco VCS-E) or any standard IP firewall solution.

When attempting to select the correct IP address(es) needed for a specific endpoint it can be helpful to reference the Calls List section of the RealConnect Tenant Reports. The sourceIP field listed in the Call Details for a successful call into the service by the desired endpoint will contain the IP address which needs to be included in the device policy.