In support of Microsoft’s feature expansion for Cloud Video Interop, Poly RealConnect Service for Microsoft Teams has enabled two new notifications for VTC participants: "Participant waiting in Lobby" and "Hand-up." The notifications serve as a visible alert that a participant is waiting in the virtual lobby, or a Teams participant has raised a hand.

Following increased use of the Poly RealConnect Service for Microsoft Teams and a preemptive communication on May 20th, 2022, Poly has activated a new Azure data center and associated interop gateway in North America. For select tenants who are not using FQDN for IP addressing, please review the expanded list of IP addresses and additional information in the RealConnect Online Documentation.

The process for requesting a free trial of Poly RealConnect for Teams has been simplified and expanded. In addition to the standard process of ordering a trial with a purchase order through Poly’s partners, a free trial can also be requested through the web app page. The web app page allows tenant information to be automatically populated when an Office 365 global administrator logs into the web app, rather than requiring the information to be manually entered on the web form.

For more details about RealConnect and Microsoft Teams, see the RealConnect Service Documentation.

Following the increase in usage of Poly RealConnect Service for Microsoft Teams and a pre-emptive communication on December 9th, 2021, Poly has activated a new Azure data center and associated interop Gateway in EMEA. For select tenants who are not using FQDN for IP addressing, please review the expanded list of IP addresses and additional information via the RealConnect Online Documentation.

There is a new feature to customize the IVR (Interactive Voice Response) screens and audio files to RealConnect for Microsoft Teams for all subscriber tenants. With this feature, an Office 365 Global administrator will be able to upload custom images and audio messages from the RealConnect Web App (webapp.plcm.vc).
The following IVRs can be customized to your needs:

To modify the current IVRs, create your Slide or Audio files and upload with the upload icon into RealConnect. Confirm that the uploaded files fit your needs and select Save. The Custom IVR Feature video shows the steps to upload the custom slides (1920 x 1080 image file) and audio messages. You can also see the RealConnect online documentation for additional information. 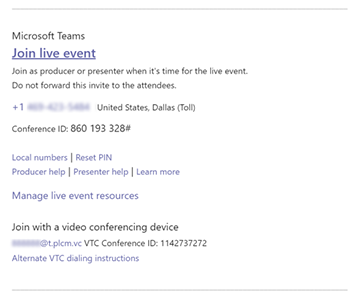 If Poly One Touch Dial is enabled for supported devices, you will be able to connect to a Live Event session with one click from a VTC system as a presenter. This additional use case extends the benefit of CVI service, as a presenter may prefer to present from a meeting room rather than a cubicle or a home office. Note that in order to dial into a Live Event call, the calling VTC must be treated as a trusted endpoint. For more details on how you can configure trusted devices, see the RealConnect Online documentation.

The Poly RealConnect Service for Microsoft Teams now includes new configuration options which provide a more granular level of control to the existing Lobby Bypass behavior. Calls into the service can now be identified by private and public source IP addresses of the standards-based video endpoint and specifically treated as a Trusted or Untrusted endpoint.

The previously available Lobby Bypass configuration is a tenant-wide option which by itself treats all calls through the RealConnect service into Microsoft Teams meetings the same across the entire tenant. Now the new Trusted Device configuration can be leveraged to allow some devices to be treated as trusted yet also treat other devices as untrusted. A common use case for this level of configuration is to define an enterprise’s own video systems as trusted to allow them to directly join the Teams meeting, but at the same time forcing participants into the lobby when calling from an unknown, untrusted external standards-based video systems.

In most meeting scenarios trusted attendees will bypass the lobby and untrusted attendees will be placed into the lobby, but the actual lobby behavior in a Microsoft Teams meeting depends on which attendees Teams is configured to automatically admit into that individual meeting. Trusted devices coming through the RealConnect Service will be treated by Microsoft Teams the same as other meeting attendees which are identified as "from your own organization". Meanwhile, untrusted devices will be treated as "anonymous" attendees.

To begin using this new capability please refer to the Trusted Device Configuration section of the RealConnect Service documentation.

Microsoft has recently enabled the new Large Gallery meeting experience in Microsoft Teams, which introduces the ability for native Teams participants to select a view displaying up to 49 video participants in a 7x7 grid layout.

Starting today Poly is happy to announce the standards-based video conferencing systems joining these meetings, by way of the Poly RealConnect Service for Microsoft Teams, can now also receive the same Large Gallery video experience. Note: As the Large Gallery option is currently being rolled out by Microsoft, it will first need to be available in a specific tenant before it can be leveraged by the RealConnect Service.

The following describes the updated behavior of the RealConnect Service with respect to Large Gallery:

We are delighted to announce that the Poly RealConnect for Microsoft Teams Interop service is accessible to Microsoft 365 Government - GCC deployments.

While the Poly Interop service is hosted via Microsoft Azure and both managed and supported by Poly, the use of the interop functionality is solely determined by the tenant’s adherence to applicable data security requirements. For additional details, please visit the following sites:

If you are a GCC customer interested in a free trial of this service, please contact us at TeamMicrosoft@poly.com.